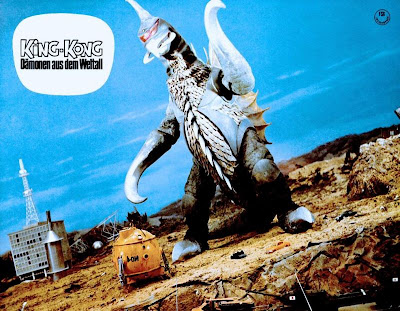 In my apparently ongoing efforts to unearth images and discuss them, we have this posed publicity shot of "Kengo Nakayama" (Kenpachiro Satsuma) from the German release of GODZILLA VS. MEGALON. What struck me as odd about it was the bathysphere on the ground. There's no good reason for it to be there, except, as David McRobie suggested, "Hey, we need something else in this picture...oh, let's use that bathysphere..." And admittedly, it does add a certain character to the shot.

At first, I thought this was a leftover prop from SUBMERSION OF JAPAN. This idea got tossed out almost immediately when a simple check revealed that Megalon preceded Submersion by several months. So, maybe LATITUDE ZERO? I asked August Ragone, and he not only confirmed the LZ identification, but also mentioned that the photo was from a press junket for GODZILLA VS. GIGAN. I'm sure it just got recycled by Toho when they were assembling material for Megalon.
Posted by C. Elam at 9:56 PM