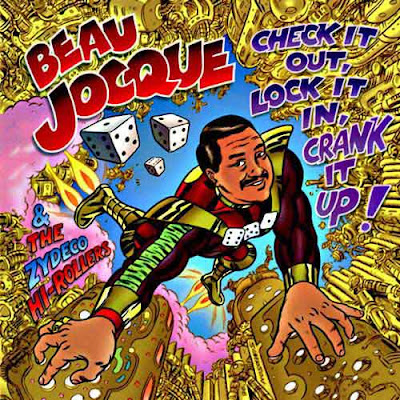 Witness the album cover art for Check It Out, Lock It In, Crank It Up!, a zydeco album from Beau Jocque. If that art looks familiar to some of my comics loving friends, that's because it's the work of Don Simpson. Don is the creator of such characters as Megaton Man and Yarn Man. I consider his comics some of my absolute favorites of all time.

While I am not as big a zydeco fan as you'll find, I'm also pretty familiar with it due to living in Louisiana. I especially knew of Beau Jocque, as he was a resident of Kinder, LA (pronounced as in "kindergarten," and if you're wondering how a town in French Louisiana ended up with a German name, you weren't the only one. It appears to be named for a Union solider who homesteaded there after the Civil War.). Kinder is literally the next town over from where I live. I could leave right now and be there in less than a half hour. That might not sound too impressive, but remember, I live in the middle of the country.

If I am to believe Amazon, this album was issued in 1998. Sadly, Beau Jocque died of a heart attack the very next year, at the way too young age of 45. His music still lives on, and that is the legacy that was probably most important to him. As for Don, he has gone on to pursue new goals outside of the comics industry. He recently turned up on the Book of Faces, though, and I am happy to say he is doing well.
Posted by C. Elam at 10:06 PM