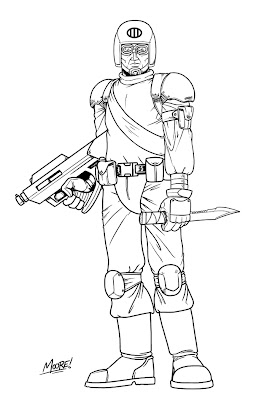 Now really, haven't I convinced you that Sean Moore is an awesome artist? Here's the latest finished commission from the Owariverse files - it's one of those rotten Third World agents that are always hassling Captain Satellite and Shelly Ericson!

It's always exciting to get art from Sean, but this particular design is something that has been kicking around in my head for something like 20 years. This is really the first time it has appeared in a full-fledged picture. Sean had previously done a card of one of these guys, but now -- well, this is the whole enchilada. The Third World agents have not changed appreciably in my head since I settled on their design back in college. And here is how they look when drawn by someone other than me!

Go visit Sean's page and tell him what a great job he did. Oh, and in other news, one of Sean's pictures was featured on the Famous Monsters of Filmland Facebook page! Recognize!
Posted by C. Elam at 7:33 PM