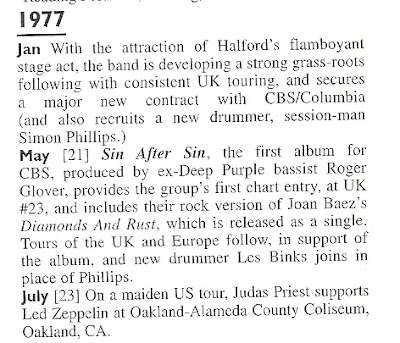 The above is a small scanned excerpt from my copy of Dafydd Rees and Luke Crampton's monstrous (1,000+ pages!) Rock Stars Encyclopedia (New Revised Edition) from 1999. I have not looked for previous or more recent iterations of this massive tome, but the version I own is branded with the logo of music channel VH1. In the days before I had the Internet, I considered it invaluable in answering music questions. It still proves to be both useful and entertaining, though the criteria for both inclusion and omission is...peculiar at times.

Still, that's not why we are here today; the excerpt reproduced here is what interests me. July 23rd, 1977 - Judas Priest opens for Led Zeppelin in Oakland, California, and my friend Melanie is there! What the book doesn't tell you is that, according to Mel, the crowd booed Judas Priest off the stage because they had never heard of them! Three years later, the album BRITISH STEEL (with "Breaking the Law" and "Living After Midnight") ensured that people at least knew who Judas Priest was!
Posted by C. Elam at 7:43 PM