The first film I watched in my movie pack madness was MISSION STARDUST (1967). This was not the original plan. I'd initially chosen the Matt Cimber-directed warrior woman film HUNDRA to kick off this little project of mine. But when I found that disc and loaded it up, I impulsively decided to scratch my long standing itch to see MISSION STARDUST.

MISSION STARDUST is based on the "Perry Rhodan" novels, and apparently has a bad reputation among the fans of the source material. While I've read some Rhodan, I can't call myself an expert. So having said that, this movie is a lot of fun. I'm not sure it deserves all the scorn I've seen heaped on it.

Don't get me wrong - MISSION STARDUST is not a classic that will change your life. But it is an engaging and likeable little epic, even though nothing really happens for the longest time. It is also achingly 1960s, in a way that could only come from that era. This alone might be sufficient enticement (or warning) for some of you.

Let it also be known for the record that this film features an actress named Essy Persson as the character Thora. Thora has become my latest fictional character crush. That's both for her personality (which I cannot show you here) and her looks (which I can). 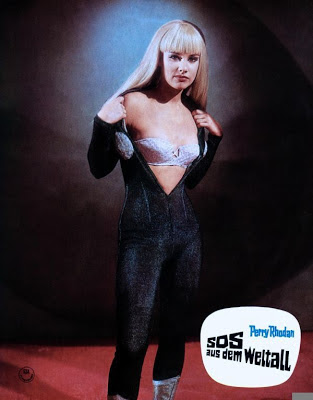 (That image comes via Cult Queens, which you should totally check out. Warning: Very NSFW!)

I probably never would have gotten around to watching MISSION STARDUST otherwise, so already the movie packs have worked out pretty well. This trailer isn't included on the DVD, but it should give you a taste of the movie.