How I Changed History 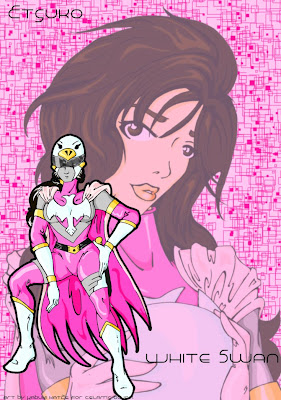 This picture is from my Return of Jetman website. In light of our recent weekend discussions of the "Tokusatsu Gals" series by Kabuki Katze, I thought some of you might want to see Kabuki's first(?) foray into the world of Japanese superheroes. But this picture is far, far more important than just for that particular milestone.

You see, if you are paying attention, you might have noticed that this picture is from 2004. More specifically, it was commissioned in July 2004 and posted in August 2004. Perhaps surprisingly, Kabuki and I had only become acquainted with one another in May of that year. It didn't take long for me to decide I wanted her to use her talents to create artwork for characters I was writing. That's a tradition that continues to this day.

I was the first person to ever offer to commission Kabuki. This was not entirely unexpected, since she was still incredibly young at the time (not that she's old now!). What I didn't expect, and couldn't have possibly guessed, was what a big impact my decision to commission her would have. It may not be overstating things to say that it was a moment that changed the course of history.

According to Kabuki, my hiring her for this commission was when the idea was planted in her head that maybe - just MAYBE - she could do something with her art. It was, she told me, the turning point when she started taking her art a little more seriously. In retrospect, you could totally see this happen. Her style and technique began evolving after we met. If you have seen her current work (and if not, why not?), it may be hard to recognize that this picture is the product of the same artist. She has improved immeasurably in the eight and a half years since this was done, and it was a quantum leap forward at that time.

Kabuki had goals and a path charted out for herself in 2004. None of it involved being a freelance artist and web designer. Would she be where she is today if I hadn't commissioned her? Maybe; maybe not. I tend to think something would have sparked the creativity inside her that has caused her to forge a very different life than the one she envisioned when we met. But the fact of the matter is that it was ultimately my commission that provided the first domino in the process that led us to where we are today.

As someone who has struggled with self-esteem issues his entire life, I find the whole concept that something I did had such a profound effect on someone else both awe-inspiring and humbling. But you just never know, do you? As I told Roy Ware back in 2010:

It hasn't just been the neighborhood kids you contaminated, Roy. :) Your kindness to me over 15 years ago was one of the keys to cementing my love of Japanese live-action SF and classic anime. I'm not just being funny when I refer to you as my "sentai sensei". You made a huge difference in my life, because this fandom gave me the confidence to write about all sorts of other stuff.

So, if I haven't said so lately, thank you. Hope you have a great time at G-Fest. :)

The moral of this story is simple: Everyone makes a difference! Yes, even you. Sometimes, in ways you don't even realize. If you try to do right by people, you may end up changing history.

I take no credit for all that Kabuki has achieved since I met her. She has accomplished all of it through her hard work, determination, and talent. But if I somehow made her see that it was all possible one night back in 2004, well, I think we can count that as one of my good deeds in life.
Posted by C. Elam at 9:50 PM