It Might Be Lost, But It's Also Quite Groovy

As you might recall, I picked Giant-Size Avengers/Invaders #1 as my favorite single comic book of 2008 a couple of weeks ago. This is still true, but a quirk of scheduling led me to forget that a very important book as far as I was concerned also saw print in 2008. 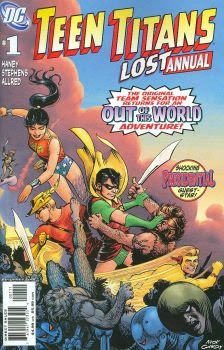 This book is Bob Haney's final comics story before he fell ill and later passed away. The fact that it took so long for it to come out is a minor injustice. This page at the Titans Tower site charts the unfortunate series of publishing decisions that befell this book. Originally announced as Teen Titans Swingin' Elseworlds Special for October 2003 publication, it was abruptly cancelled a mere month after DC solicited it! It languished in limbo until it finally saw the light of day as Teen Titans Lost Annual #1 on January 9, 2008. And yes, it coming out so early in 2008 led me to forget that it wasn't a 2007 book.

I will never quite understand the problem with this comic. Sure, it's weird, but I would think that is to be expected when you hire BOB HANEY to write a script. I'm not sure how a silly one-shot could have torpedoed DC's latest futile attempt to recapture the Titans sales magic they so amazingly squandered back in the 1980s. If anything, the way they ultimately published the story is probably more confusing than its original scheduled format.

(For the record, the "Elseworlds" version would have been a squarebound book clearly marked as out of regular continuity. The "Lost Annual" version is a standard stapled comic book with no clear marking of its non-canonical status. Why did any of this make a difference? I have no idea!)

As for the story itself, it is a fine piece of funnybook nonsense, wonderfully illustrated by Jay Stephens and Mike Allred. Teen Titans has never been my absolute favorite Haney title (that prize goes to a certain Batman team-up series), but it made me smile to finally get to see his first crack at them since 1979. Adding to the fun is a fabulous cover by classic Titans artist Nick Cardy, to say nothing of some bonus pieces by him lurking in the back pages.

No one is going to be confused into thinking Teen Titans Lost Annual #1 is an amazing piece of literature that will change the lives of its readers. It is, however, a darn entertaining comic book, and the final bow of one of my favorite writers. It deserves better than to be forgotten.
Posted by C. Elam at 12:21 AM