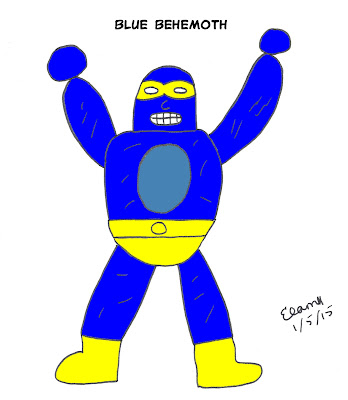 Mortimer Kane was the very definition of the word “milquetoast.” It didn't matter that he was one of the most brilliant graduate students at Major Technological Institute (MTI); he was so unassuming and timid that he was largely ignored by most of the campus population. In fact, the only person he could truly call a friend was his colleague Danny Graham. That wasn't really bad, except Danny was just as socially inept as he was.

Morty Kane's life took an unexpected turn the day he got caught in his experimental Molecular Modifier. It affected an irreversible change on Kane, mutating him into a large, blue-furred anthropoid. His intelligence was left intact, but there was a noticeable difference in attitude. He became more boisterous, opinionated, and outgoing.

Ostracized even further due to his condition, Morty created the Blue Behemoth identity to fight injustice and...well, for something to do. Soon joined by his buddy Danny under the name Drone Man in the crimefighting business, the duo forged a solid reputation at the college and in the surrounding area for their tireless efforts to keep the peace. By becoming even weirder, two losers had made themselves Big Men on Campus.

Blue Behemoth (now his legal name) possesses tremendous strength, fantastic stamina, and astonishing agility. However, his condition does have its disadvantages, too (besides that pesky "no longer human" thing). For example, contrary to popular belief, BB's mask is not a quaint affectation. A side effect of his transformation is color blindness, and the mask contains corrective lenses designed by Drone Man to maintain proper vision.

Unsurprisingly, Blue Behemoth has developed a number of idiosyncrasies since his change to ape man. Though a proponent of clean living as a human being, he has become fond of fine cigars, stag magazines, and all manner of alcoholic beverages since his transformation. Most people know better than to try to argue with him about such matters at this point.

Blue Behemoth and Drone Man were instrumental in assisting Roxanne Prize in creating her own secret identity as Firegirl. BB harbors a crush on Prize, but so far has been unable to admit it to anyone. It remains to be seen if this uncharacteristic throwback to his old personality traits will persist.

Blue Behemoth was there when the Invincible Alliance was founded, and remains one of the core members of the group. Though he is loathe to admit it, the IA gives him a sense of belonging and purpose that had been previously lacking in his life. He can frequently be found loafing around its headquarters when not on a mission.
Posted by C. Elam at 2:41 PM