In the beginning, there was Ferro Man. 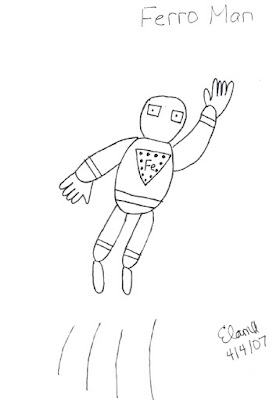 (2007 artwork of Ferro Man)
Ferro Man was pretty blatantly inspired by/ripped off from the character of "Ferro Lad" in the DC Comics series Legion of Super-Heroes. Available evidence suggests I created Ferro Man in 1980. It may have been as early as February, though it was probably March. It could have been as late as April or May, but I vividly recall drawing him in my 2nd grade classroom.

Ferro Man was not my first original character, though "original" is definitely debatable in his case. I can't even trace a direct line from him to Captain Satellite. I just choose to start with him because he was the centerpiece of the longest-running fictional world of my childhood, and he filled the same basic role that Cap does now. Ferro Man was essentially a synthesis of Iron Man and Batman, with a dash of the authentic Ferro Lad thrown into the mix. He was the top hero in the imagination of Christopher Elam well into the 5th grade.

It was during my 6th grade years (1983-1984) that I rather inauspiciously conceived a character during recess who would turn out to be very important indeed. It was so unexpected that I genuinely have no recollection as to when this art actually happened. I say it was 1984, but that's really just a guess. Could be 1983; could be 1985.

That, my friends, is what I believe to be the very first drawing of "Captain Satallite." I had some trouble with the word "satellite" for awhile, but I can happily report I have since mastered it. Good thing, I suppose.

What's interesting is the fact that Captain Satellite was originally a VILLAIN! I pictured him as an adversary for the various superheroes I was playing around with at the time, none of whom have survived to the present. Later, I had a change of heart and "killed off" the villainous Captain Satellite to replace him with a second Cap who was a superhero. As time went by, Captain Satellite's villainous origins were forgotten entirely, and the superhero version became the only version. That incarnation is the one who evolved into the Captain Satellite who exists today.

There was nothing particularly special about Captain Satellite in the early days. There was no secret identity or motive or really anything beyond the name and the look. He was just one more character among a veritable army I concocted. But that name and that look were so appealing to me that he endured as I moved on from his contemporaries. Gradually, through the process of "growing up" (as it were), the ranks of my stock characters dwindled until Captain Satellite became the last man standing.

Captain Satellite became a fixture in my daydreams and doodles. I developed a vague concept of who he was and what he was about, but the whole thing was fluid and subject to my whims on a particular day. Honestly, it's borderline amazing I remember anything about the development of Captain Satellite and his cast because I drew very little besides Cap zipping along and wrote down even less.

Gradually, my more "mature" (ahem) mind devised new characters. Some of them, like Shelly Ericson and Third World, were part of Cap's world right from the start. Others were just bouncing around looking for an outlet because I found them interesting. This isn't really their story, but they are part of the story as I expanded the world of Captain Satellite. A world which still existed almost entirely in my head.

Almost. There are a handful of surviving attempts at codifying Captain Satellite. This is the most notable example. 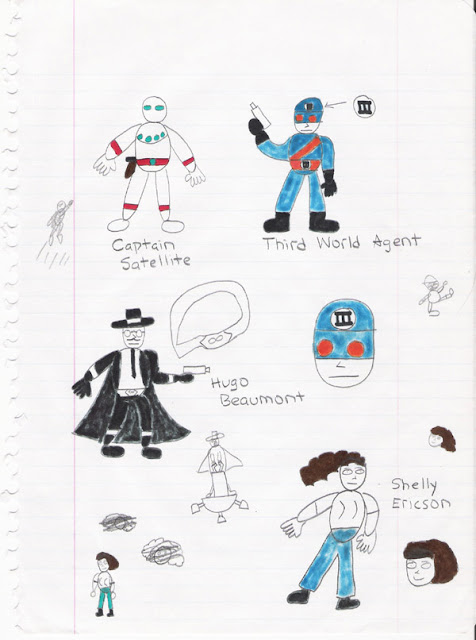 Calling that a "model sheet" is probably unduly flattering it, but it demonstrates me trying to figure out how I wanted certain characters to look. It is undated, but was created sometime from 1991-1994. My markers were dying when I colored it, as you might notice. I remember that being very frustrating. My limitations as an artist were equally frustrating, and I hadn't yet learned how to compensate for them. So this got filed away in my papers and forgotten until years later. I was starting to get a grasp on the visuals though.

Captain Satellite was never far away from my thoughts as the years rolled on, but I was never able to do anything serious and truly artistically satisfying with him either. He seem destined to just be my personal mascot. When I published the original fanzine version of OWARI, I whimsically listed the publisher as "Captain Satellite Productions." I have a vague memory of including a picture of him on the cover of one of my video trading lists, but I have yet to find a copy of this and it may be lost. That was the extent of Captain Satellite's public exposure.

The internet changed everything for Captain Satellite. It just took a few years for it to really happen. But that's a story for another day.