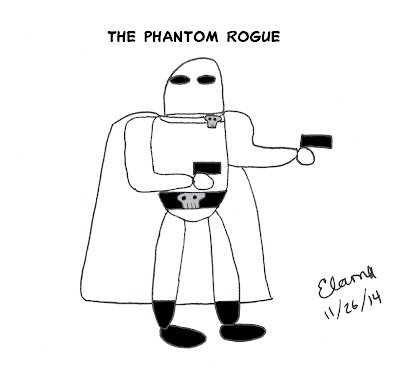 The Phantom Rogue isn't in the super villain game for the power, and he isn't in it for the thrills. He's in it for the money. Cold, hard cash, please. True, he took control of a splinter faction of Third World once, but that was just the means to an end. He's after riches, pure and simple.

Despite what he leads people to believe, the Phantom Rogue has no special powers. His primary abilities are incredible greed, astonishing sneakiness, and an improbable ability to escape from danger at every turn. It's assumed that he adopted his ghost trappings to reflect his elusiveness. This theme even extends to his grab bag of gimmicks, such as the Spookmobile and the Spookcopter. However, his chief weapons are a pair of pistols he carries at all times.

The Phantom Rogue's best-known caper is probably the time he disrupted a perfectly good football game between the Major City Aces and the Middleburg Yellowjackets by stealing Miles Major Memorial Stadium using a dirigible. He is also well-remembered for holding the Mando Building hostage with his Stupendo Death Ray. The "Stupendo Death Ray" turned out to be a hoax, or it might rank higher on his list of criminal accomplishments.

The true identity of the Phantom Rogue is unknown. He has impersonated assorted people, such as smooth-talking ladies' man Broc Cubic, during his career. In fact, that career began prior to the advent of Captain Satellite and his fellow heroes. He has run afoul of those do-gooders on many occasions, but true to form, he has always managed to find some means to get away no matter how brazen his crime.
Posted by C. Elam at 2:24 PM