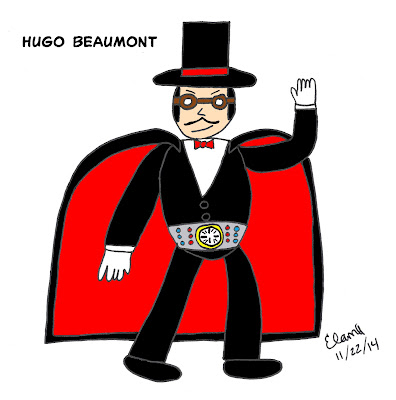 The man we know as Hugo Beaumont was bored. Very, very bored. It was hard not to be, considering how he lusted for adventure in the safe and sterile world of the far future. He craved excitement, but that was the last thing his environment offered him. All he could do was throw himself into developing the technology that would allow him to break the shackles of his dull existence.

Finally, Hugo Beaumont (it is uncertain if this is his real name or a pseudonym he adopted) achieved his goal with the creation of the time travel device the Chronal Belt. Using the belt, he can travel through time and space to anywhere in the known universe and beyond. Now, a normal person would utilize such an invention for useful purposes. But Hugo Beaumont? He chose to make himself into a nefarious villain - for kicks.

Garbing himself in a peculiar form of anachronistic costuming, Beaumont traveled to the era of Captain Satellite to match wits with the hero. Why? Well, he won't say. He clearly enjoys the challenge, and considers Cap and his fellow heroes to be worthy adversaries. But is there a deeper purpose to his various and sundry crimes in our time period? Therein lies one of the many mysteries of Hugo Beaumont.

Besides the Chronal Belt, Hugo Beaumont has a number of fantastic weapons at his disposal. He designs his armament to match his antique guise, so it is commonplace for him to haul out such outlandish contrivances as the Bombastic Blunderbuss, the Strato Unicycle, or the Hyper Hypno Coin. Comedic at first glance, they are nevertheless efficient and potentially deadly.

Hugo Beaumont has occupied himself in our age with everything from petty theft to elaborate cosmic "experiences." But does he secretly know how the game will play out? Only time will tell!
Posted by C. Elam at 2:20 PM