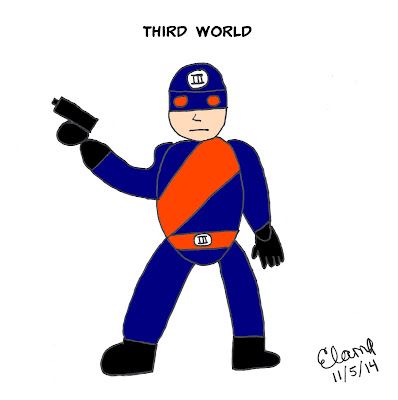 The origins of the organization dubbed “Third World” are shrouded in mystery to this day. What is definitely known is that they arose during the years after World War II. Whispers say that among its founders were former Nazis, and the trappings of the group would seem to bear this out. But Third World has followed its own peculiar agenda, far separate from that of Hitler and his ilk.

Third World's goal is complete and utter world domination. This has been complicated by the numerous splinter factions that have formed from it, to say nothing of the fact that none of them are particularly competent. No one is even sure if their nominal commander, Third World Leader, is the rightful claimant to that title. Still, they work tirelessly to achieve their rather lofty goal. What they plan to do after they take over the world is open to debate, since they don't appear to have a clear idea themselves.

Third World Agents are typically garbed in paramilitary gear evocative of the group's possible German inspiration. They are issued a veritable arsenal of weapons, and in theory all are highly-trained professional mercenaries. The "highly-trained" aspect can be hit-or-miss, much like their shooting accuracy. A Third World Agent is required to give the organization's three-fingered salute and shout "Three For Victory!" loudly and often. This is the one thing all of them seem to master.

Third World employs a number of super-science devices in their arsenal. At one time, they sought to kidnap Paul Mann to force him to create more such gadgetry for them. Failing that, they tried to assassinate him, with predictably less-than-successful results. These foiled plots led directly to the birth of Captain Satellite, who is now the biggest thorn in Third World's side. Not good thinking on their part, was it?
Posted by C. Elam at 2:14 PM