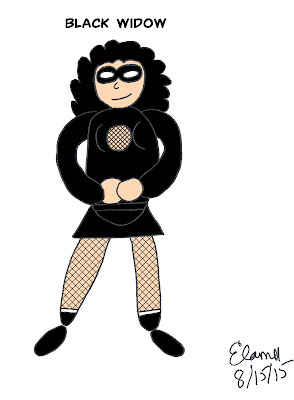 Black Widow is a fictional superheroine whose exploits are published by SR Enterprises under their Leader Comics imprint. She made her first appearance decades ago in Cat-Man Comics, the same comic book that debuted Cat-Man and the Deacon. Though she has never really been considered a "first-string" character, she is nevertheless a mainstay on the stands and spinner racks for SR Enterprises.

Due to the limited availability of Eve East to reprise her role as Kitten for the Cat-Man film series, producer Ivan Walters instructed screenwriter Fernando Santelli and director George Lime to bring Black Widow into the mix for the most recent installments. What's more, he cast a legitimate star for the part when he signed Amber Sigurdsson to be Black Widow. The contentious interplay between Sigurdsson's Black Widow and Bruce Chase's Cat-Man has added a whole new dimension to the venerable Cat-Man franchise.

Needless to say, the addition of Black Widow to the Cat-Man Cinematic World has caused her popularity to skyrocket. There is even clamoring among a segment of the fandom for her to receive her own solo movie. Both Ivan Walters and Amber Sigurdsson have thus far been non-committal about the idea. However, it is worth remembering that Walters didn't become a big shot media mogul by ignoring the demands of his audience.


*EDITOR'S NOTE: Black Widow is based on a public domain character whose authentic history differs from this fictional account. This picture utilizes patterns from 13 Fishnet Patterns by chaos-flare.
Posted by C. Elam at 12:56 PM