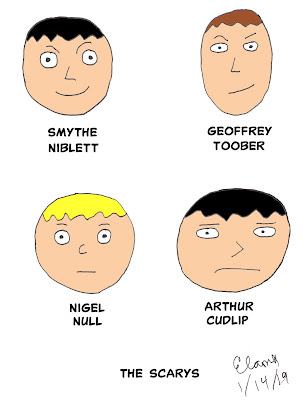 The Scarys are an English rock group and one of the richest and most esteemed such combos in history. Unsurprisingly, they are also a bunch of nutters. What, you expected them to be respectable, upstanding citizens? They can't even spell the name of the band correctly!

Arthur Cudlip (vocals/lead guitar) is the de facto leader of the Scarys since he's the one to blame for their formation. He was a scruffy hooligan working as a bootblack on the city streets of Londinium, and busking during his off-hours to make ends meet. Noticing he was earning 20 quid per day more singing for spare change, Cudlip figured he might have a future in the music business. But he probably needed a band to make it happen.

Cudlip went on the prowl for fellow lowlifes who could play instruments, and soon recruited Smythe Niblett (rhythm guitar), Geoffrey Toober (bass), and Nigel Null (drums). This quartet dubbed themselves “The Scarys” for reasons which are lost in a drunken haze, and were soon wreaking havoc in the pubs around town. Quickly signed to Magnetic Records, they recorded their debut LP The Scary Album in no time flat. The first single, "Shine Your Shoes (For Tuppence)", was a savage dig at Cudlip's old job and a smash hit that zoomed to the top of the charts. "Shine Your Shoes (For Tuppence)" and the rest of The Scary Album cemented the Scarys' reputation for catchy tunes and loutish lyrics.

During the sessions for the group's follow-up, I Have A Hat, they crossed paths with Zoragaza the Mystic. The nature of the relationship between Zoragaza and the Scarys is still unclear and open to conjecture - especially since neither are what one would term reliable sources. What is known is that Zoragaza performed in-show illusions during the Scarys' subsequent concert dates. This culminated in his appearance on the sleeve of the Scarys' third album, the thoroughly puzzling progressive rock effort Forest of the Sinister Mind.

Zoragaza the Mystic and the Scarys soon parted ways amid much mutual acrimony. The massive failure of Forest of the Sinister Mind at the cash register may or may not have led to this falling out. Suffice to say, the Scarys' hastily released fourth album was entitled ...Ooops? and marked a return to both the sound and the sales that made them so notable.

The Scarys (gleefully declared “The World's Most Obnoxious Band” by the rock press) have continued to make records because they have somehow managed to survive their often peculiar life choices. It was touch and go one evening at Major City's New Moon Garden though, when their old chum Zoragaza the Mystic disrupted the final leg of their tour with his newfound authentic magical powers. Fortunately, the Blue Behemoth was attending the show and subdued the mad magus with the aid of his allies in the Invincible Alliance. Grateful for the save, the Scarys invited the Alliance to appear on-stage with them two months later at a benefit show at Miles Major Memorial Stadium. Blue Behemoth (trumpet), Drone Man (synthesizer), Ultimate American (cowbell), Firegirl (tambourine), and Elektroid (triangle) accompanied the Scarys on “Wizards Are Wankers” - a brand-new song Cudlip wrote especially for the performance.

Most recently, Arthur Cudlip has abandoned his bandmates and turned his limited attention span to a side project he christened "The Scary Metal People" for some unfathomable reason. The SMP is a power trio consisting of Cudlip, bassist Ian Overham of Wee Reptile and drummer Angus Tingley of Thwack. The idea is apparently to pursue a "heavier" sound. The Scary Metal People have been playing gigs at smaller venues like Major City's Indigo Mollusk and are planning to release an album entitled Wampeter For Trouble. Where it goes from there is anyone's guess, but it seems inevitable that the classic lineup of the Scarys will eventually have a reunion. It would be too profitable not to happen.
Posted by C. Elam at 1:07 PM