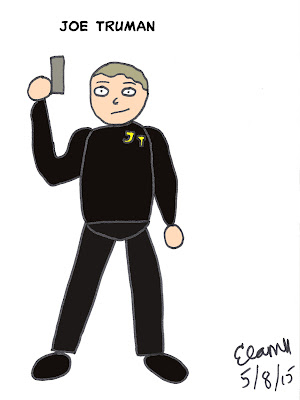 The brief marriage of Tex and Anna Truman only produced one child, a son named Joseph or "Joe," before Tex filed for divorce. Though Tex offered to help Anna raise Joe, Anna's bitterness led her to cut Tex off entirely. Since Anna's wealthy parents Byron and Claire Malone had not approved of Tex in the first place, they were happy to help her in any way possible. So Joe Truman grew up idolizing his father from afar and resenting him for leaving his family.

Joe Truman was recruited by C.H.I.E.F. while still in college at Bell State University, and considered joining the organization after earning his degree. He ultimately chose not to sign up, making the excuse that working for the government would be too stifling. His real reason? Tex Truman was the executive director of C.H.I.E.F. at that time, and Joe chafed at the very idea of taking orders from his father.

Striking out on his own as a freelance operative, Joe Truman found fame and fortune selling his services to the highest bidder (which ironically sometimes included C.H.I.E.F.) and selling himself in the media. He became a successful author simply by penning engrossing and lurid accounts of his many colorful adventures. He had plenty of material for his books, too. He encountered everything from ninjas to monsters during his career, with more than his fair share of clashes with Third World thrown into the mix.

Despite his privileged upbringing, Joe Truman was unpretentious almost to a fault. Perhaps nothing was more emblematic of this than his decision to make his home base in the gritty, blue collar city of Tungsten rather than a more glamorous locale. Joe had first set foot in Tungsten when he'd been called on by Hart Baccarat of Gold Bar Records to rescue the vocal group the Tungs-Tones ("The Sound of Tungsten") from kidnappers who were holding them for ransom. Joe had fallen in love with Tungsten by the triumphant conclusion of the case, calling it his kind of town.

Things took a turn for the worse for Joe Truman when his mother died of pneumonia at the age of 60. He began drinking heavily, and his habit of smoking Viscount Cigarettes went from one pack a day to four. He weighed reaching out to his father to maybe build a real relationship with him. When he looked into the situation, Joe realized Tex was involved with much younger woman - younger, in fact, than his own son. Joe figured the old man couldn't be bothered with him and discarded the notion of getting in touch.

Twenty-five years ago, Joe Truman drove his brown IMC Goblin compact car into Major City to drop off a manuscript at his publisher Lieber Books. He stopped at a Burger Chief fast food joint for a lunch of a burger, fries, and vanilla shake before hitting the road back to Tungsten. He never made it home. Joe Truman vanished without a trace that day. His disappearance is an enduring mystery, and no evidence has ever turned up to offer even a hint as to what happened.
Posted by C. Elam at 2:51 PM