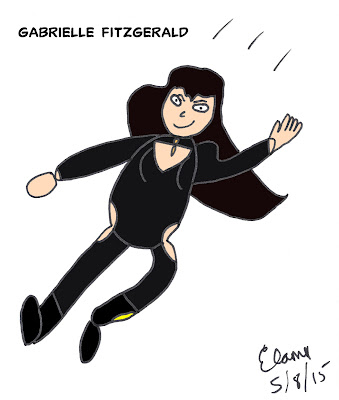 Gabrielle Fitzgerald was a top C.H.I.E.F. agent with a specialty as a codebreaker. Highly-skilled in the martial arts, Gabrielle was not bashful about doing whatever it took to accomplish her mission. Her tenacity earned her the nickname "Jinx" because it was bad luck for anyone to cross her.

Jinx wasn't looking for love when she joined C.H.I.E.F., but she found it when she met up with Tex Truman. The mutual attraction between them was obvious despite their considerable age difference (offset by Tex’s youthful appearance & vitality), and they flirted shamelessly almost from the moment they laid eyes on one another. Tex was so smitten with Jinx that he resigned his post as C.H.I.E.F. executive director so he could become her partner in the field and her partner in romance. How do you like that?

The team of Tex and Jinx was celebrated in their era for getting the job done and having a lot of laughs in the process. Eventually, they got careless in their personal lives and Jinx unexpectedly became pregnant. The soon-to-be parents were delighted by the news regardless of the circumstances, and nine months later, a baby boy they would name Dean Truman was born.

Pregnancy and motherhood brought an end to Gabrielle Fitzgerald's C.H.I.E.F. career, as she retired to spend her time raising Dean. It didn't end her love affair with Tex though, and the two found time to tie the knot when Tex stepped away from C.H.I.E.F. active duty himself. As Dean grew older, they decided to have a second child, and daughter Debbie was added to the household about a year later.

Time has been kind to Gabrielle Fitzgerald (she never did change her name when she got married). In fact, she looks younger now than when she first hooked up with Tex. Whether the cowboy shared his secret of longevity with her or if it just rubbed off naturally is a matter of conjecture. It certainly wouldn't be polite to ask the lady.

Today, Gabrielle keeps fit by working out and chasing after Tex when he's not off serving as C.H.I.E.F. liaison to the Invincible Alliance. Speaking of the IA, Dean is the leader of the group as the superhero Ultimate American, and Tex and Gabrielle are very proud of him. Young Debbie still lives at home, and while also the source of considerable pride, she worries her parents a little too because she is so quiet and reserved. Gabrielle has convinced Tex to leave the girl alone and let her develop at her own pace. If and when Debbie comes out of her shell, it will be when she is ready.

As shocking as it seems, the fun-loving and mischievous Jinx appears to be quite content with the life of a housewife. Just don't ever say Tex tamed her or domesticated her. She will correct you forcefully that she was the one who chose to settle down. And don't you forget it.
Posted by C. Elam at 12:51 PM