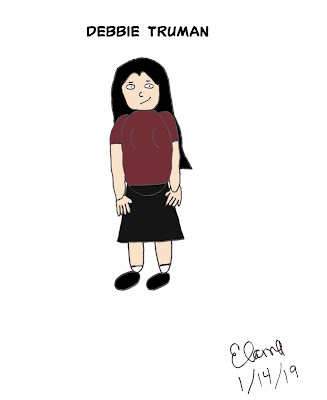 Let's get one thing straight about Debbie Truman - she's not unhappy. She gets good grades in school. She has friends. She has a great relationship with her family. If you asked her, she'd tell you life is pretty sweet. But that's all she'd say, because Debbie is very quiet and prefers to keep to herself.

The trouble with being an introvert in a clan of extroverts is everyone wonders if there's something wrong with you. Debbie's parents, Tex Truman and Gabrielle Fitzgerald, are a pair of famous and quirky former C.H.I.E.F. agents. Joe Truman, the half-brother who disappeared before she was born, was equally well-known as both a freelance man of adventure and author of lively accounts of his exploits. Even Debbie's big brother Dean Truman, whose personality is most in line with hers, leads the superhero group the Invincible Alliance as the colorfully-costumed Ultimate American. So Debbie often feels like the apple that fell very, very far from the tree.

It's no surprise Tex and Gabrielle worry about their daughter. Tex's instinct is to cajole her into being more outgoing, but fortunately, he has Gabrielle to keep him in check. Gabrielle contends they should let Debbie mature and find out who she is at her own pace. If and when she comes out of her shell, it will be when she's ready. In his heart, Tex knows Gabrielle is right, but it's still difficult for him to let Debbie sit in solitude as much as she does.

What's interesting is that Debbie Truman has a little secret. Oh, her Mom has been with her when Debbie has bought the scrapbooking supplies, but Gabrielle just assumes her daughter is assembling tributes to the bands whose music reverberates through the house. In reality, Debbie is pasting together collections of news clippings, past and present, of her celebrated relatives that she has copied from every library in town. Because you see, Debbie really is fascinated by the family "business" as it were, but it's something she just can't bring herself to admit. At least, not yet.
Posted by C. Elam at 10:32 AM