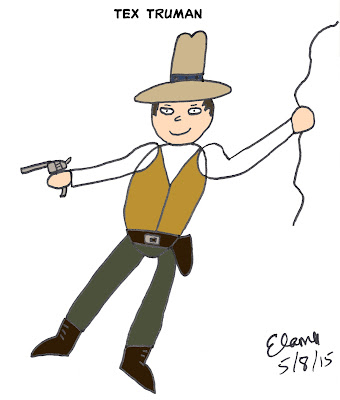 Tex Truman is a larger-than-life cowboy hailing from the plains of west Texas. The real story of his early years has been lost amid the numerous tall tales Tex has told ever since that time. There are no records that even confirm "Tex Truman" is his birth name like he says, and not just a catchy moniker he gave himself. You can be certain of one thing - all the misdirection and confusion is 100% deliberate on Tex's part.

The first independently-verifiable information available on Tex Truman comes from 70 years ago, when he joined C.H.I.E.F. as a special agent. He soon became one of C.H.I.E.F.'s top operatives, despite the fact many in the organization considered him an oddball. After all, most agents weren't going into action with a ten gallon hat on their head and a pair of shooting irons holstered to their belt the way Tex was.

Shortly after his C.H.I.E.F. recruitment, Tex married a young heiress named Anna Malone. It is assumed this was Tex and Anna doing "the right thing" since baby Joseph was born within 6 months. However, Tex quickly came to realize he was not cut out for a home and family, and filed for divorce after only about a year of marriage. Hoping to spare Anna further heartache, he promised to take full responsibility in helping her with Joe. Anna refused this offer, saying she wanted nothing more to do with Tex and telling him to stay away from her and their son in no uncertain terms. As a result, Joe Truman grew up idolizing his father for his exploits and resenting him for his absence.

While his personal life was a disaster of his own making, Tex Truman could at least take solace that his C.H.I.E.F. career was on the rise. Indeed, after numerous decorations for meritorious service, Tex Truman found himself nominated for the position of director of the organization. It was a bit of a minor upset when he actually got the appointment, but it brought on a new resolve in the crazy cowpoke. Tex Truman honorably served as C.H.I.E.F. executive director for many years, and totally dedicated himself to his job. That is, until the moment Gabrielle Fitzgerald crossed his path.

When Gabrielle "Jinx" Fitzgerald first enlisted in C.H.I.E.F. as a codebreaker, she and Tex did their best to keep things professional. Trouble was, it was glaringly obvious to everyone that there was an almost electric attraction between them. Finally, not wanting to compromise the integrity of their agency but also not wanting to lose the woman he was falling for, Tex Truman resigned his post as director and applied to be reinstated as an agent. His buddy Rudy Boemer was installed as his replacement, and Boemer's first act as director was to grant Tex's application and make him Jinx's partner in the field.

Tex and Jinx became almost inseparable as a team and as a couple thereafter. Their free-wheeling, fun-loving adventures are the stuff of legend. It sort of came to an end (albeit a happy one) when Jinx became pregnant with their son Dean and elected to retire from service to raise the child. However, she urged Tex to continue working with C.H.I.E.F. because she knew how much the agency meant to him.

Then came the awful day when Rudy Boemer was assassinated by Third World double agents who had infiltrated the C.H.I.E.F. ranks. Tex teamed with Rex Coronado and other loyal C.H.I.E.F. operatives to track down and personally capture each and every traitor responsible for Boemer's murder. Coronado was subsequently named the new director (with a recommendation from Tex), but C.H.I.E.F. was shaken to its very core by the incident. It also led to Tex Truman re-evaluating his priorities.

Tex reflected on the tragedies that had hit so close to his heart - Joe's disappearance, Anna losing her life to pneumonia, and the senseless killing of Rudy Boemer. Meanwhile, he had a girlfriend who loved him dearly and a son who deserved a father who was there for him. About a week later, Tex Truman sidled up to his pal Rex and handed him an envelope with a letter announcing his retirement from C.H.I.E.F. active duty. Then he went home and asked Gabrielle if she would marry an ornery ol' outlaw so they could spend the rest of their lives together.

Tex Truman currently stays involved in the adventure game by serving as C.H.I.E.F. liaison to the Invincible Alliance – the very group his son Dean leads as the Ultimate American. Otherwise, he helps his wife Gabrielle raise their young daughter Debbie. He is uncannily spry for being 96 years old. Perhaps that time 60 years ago when he vanished in the mountains of Tibet for a month has something to do with it?
Posted by C. Elam at 12:30 PM