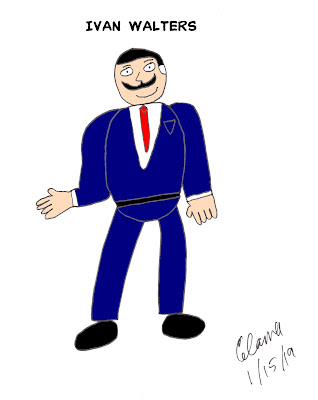 When he was the director of sales for Xenorama Pictures, Ltd., Ivan Walters saw firsthand how much profit they brought in through the distribution of sci-fi movies like I Was A Teenage Crustacean. Ivan formed his own Wham Films, Inc. production company because he wanted a piece of that action for himself. He eventually found his success, but it came via a somewhat more roundabout path than he planned.

The Blue Ooze was Ivan's first feature, and it was a modest hit upon initial release (it later earned cult fave status after becoming a late-night TV staple). During the shoot, Ivan happened to discover some old Cat-Man comic books while waiting at the barber shop. Returning to the studio later that day and chatting with screenwriter Phil Banger, Ivan was surprised to learn that Banger had scripted Cat-Man for many years. Ivan asked Banger if he thought Cat-Man had any potential for the silver screen. Banger suggested that a television show might be better than a movie, at least at first, and a legend was born (and Phil Banger earned a sweet development deal that set him up for life).

Cat-Man was nothing short of a phenomenon when it bowed on the DeKalb Network. However, like all TV series, it ran its course after awhile and left the airwaves. The Deacon, a companion program starring another comic book hero, had only lasted a single unsuccessful season. Ivan continued to toil in television for a few years, producing shows such as Lomac! and Duke Palone, Private Eye for DeKalb for decent ratings. But Ivan was biding his time, because he had shrewdly retained the film rights to Cat-Man and he was waiting for nostalgia to kick in for it.

Ivan Walters' patience paid off beautifully. The Cat-Man film series has cranked out one blockbuster after another since its inception. The introduction of Black Widow and the carefully interwoven Cat-Man Cinematic World are just two aspects that keep people buying tickets. Though he was already doing well, Ivan Walters has become a very wealthy man thanks to Cat-Man.

One of the few frustrations of Ivan Walters' career is the nagging feeling that, while he's facilitated plenty of creativity, he has created very little himself. He has taken steps to scratch that itch by signing with Royal Deal Features Syndicate to write a graphic novel of their iconic Dirk Dixon property. Ivan promises that his updated take on Dirk Dixon, Gayle Allen, Dr. Zabor, and company will remain true to the spirit of the vintage comic strips. There are misgivings in some quarters as to how Ivan will handle the overt racism of the original concept of stereotypical "Mongols" as the villains. However, Ivan's longtime happy marriage to B-movie scream queen Lonnie Yee suggests he will be sensitive to the subject.
Posted by C. Elam at 1:00 PM