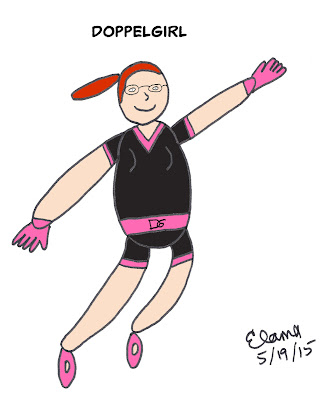 Judy Katz was a highly decorated C.H.I.E.F. agent specializing in disguise and linguistics. Then, in a shocking turn of events, she went renegade and switched sides to become a costumed criminal. No motive for this abrupt shift in philosophy has ever been established.

Katz first surfaced in super villain circles as Spookette, "hench-wench" to the Phantom Rogue, during an attempted robbery of The Monkey's Banana bookstore and record shop in Major City. Spookette's main contribution to that job was garnering the attention of Roxanne Prize, who changed into her Firegirl uniform and prevented the bandits from stealing a single thing. The Phantom Rogue fled in his Spookcopter, but he abandoned Spookette to be taken into custody.

Weeks later, a Third World battalion led by the mysterious masked Madame Troika stormed the Major National Bank and demanded cash. Alas, they picked a day Shelly Ericson was there to make a deposit, and Shelly mopped the floor with the subversives without even breaking a sweat. It later came out the Third World agents were all wannabes - petty thieves who had been tricked by Madame Troika into thinking they were joining the real Third World. Third World was so indignant they issued an actual press release denying responsibility for the hold-up and labeling Madame Troika "a complete fraud." Though she had slipped away while Shelly made short work of her ersatz charges, surveillance footage revealed Madame Troika was undoubtedly also Judy Katz.

Judy Katz has since concentrated on her current alter ego of Doppelgirl. Her M.O. is to learn about planned heists through the grapevine, show up in one of her many disguises, and interfere so she can grab the loot herself. She has never succeeded in actually making off with any ill-gotten gains, but she has disrupted a lot of wrongdoing just by her very presence.

Doppelgirl's roster of fake identities is long and impressively varied. On the female side, she has played such roles as vocalist Melody Singer, fashion model Chili Brees, and chef Cookie Doe. Perhaps even more uncanny are her male personae like auto racer Red Carr, oil tycoon Burl E. Hoss, and "Donut King" Duncan Coffey. As you may have noticed, Doppelgirl has a penchant for puns. That may be her worst crime.

Truth be told, there are clues Doppelgirl might not be a criminal at all. She has never profited from her actions, yet seems to get along fine despite no visible means of support. On those rare occasions when she is caught, like her stint as Spookette, she only spends a few hours behind bars before she "disappears" in the system and subsequently turns up scot-free. There's something suspicious about Doppelgirl's career of infamy. Is she really a deep cover agent infiltrating the underworld to take it down from the inside?
Posted by C. Elam at 7:36 PM