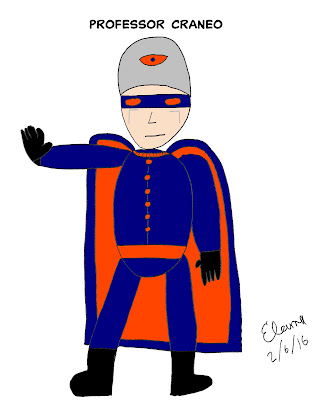 The subversive organization Third World has a deep commitment to super science in their quest for global domination. It hasn't helped them accomplish their goal yet, but they're optimistic. Helmut Krondorf was once the brightest light in the Third World Science Division. Then things got weird.

Krondorf invented a computerized helmet he dubbed the Craneo Cap. The Craneo Cap boosted Krondorf's intellect considerably, and he was already a genius in the first place. There were only two drawbacks to the Craneo Cap - 1) it was very tall, making doorways a problem sometimes, and 2) it eventually fused itself directly to Krondorf's head, effectively making him a cyborg.

In honor of his newfound cerebral prowess, Helmut Krondorf rechristened himself Professor Craneo. His ambition quickly grew to taking over command of Third World. This might have gained traction if not for the fact that the Craneo Cap was turning him into something just as much machine as man. The transformation sufficiently creeped out even the members of Third World enough that Craneo was soon ousted from the group.

Professor Craneo thereafter embarked on a solo career of evil, but was impeded by his increasing instability due to the Craneo Cap's influence. He is probably best-known for his ill-fated attack on Major City's Maximilian International Airport. Joe Truman just happened to be at "The Max" that day to catch a flight to Bulgaria and foiled Professor Craneo, turning the captured villain over to C.H.I.E.F. for safekeeping.

Professor Craneo deteriorated in custody as the Craneo Cap wiped most traces of humanity from his mind. C.H.I.E.F. placed him in suspended animation in their special Cyborg Refrigeration Unit in the hopes of saving his life and possibly finding a cure for his condition. He is still there to this day, and it's likely he will remain there for the foreseeable future.
Posted by C. Elam at 8:38 PM