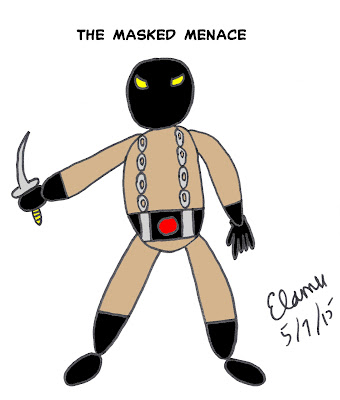 The Masked Menace first appeared in 1941 as a foreign saboteur who fought Thunder Man on the Parallel Earth they both call home. Though his initial scheme to blow up American dams was foiled, the Masked Menace quickly established himself as Thunder Man's arch-foe in the minds of virtually everyone by sheer persistence. When the United States officially entered World War II, he began to more blatantly express his allegiance to the Axis powers - particularly the Third Reich.

The true identity of the Masked Menace was a matter of considerable interest to the U.S. government due to his fifth columnist activities. Suspicions eventually zeroed in on Wilhelm Krupp, a member of the German American Bund. However, as federal agents sought the Bundist for questioning, they discovered him murdered in his apartment. That evening, Thunder Man caught the Masked Menace planting TNT at a munitions factory.

The end of WWII did not mark the end of the Masked Menace. His anti-American rhetoric faded away, to be replaced almost entirely with a focus on crime. The Masked Menace continued in this vein until 1948 when he was gunned down by his own gang. That seemed to spell curtains for the infamous villain.

Somewhat inexplicably, the Masked Menace returned in 1954, claiming to be the original and refusing to explain his resurrection. He briefly espoused a belief in Communist doctrines quite at odds with his wartime views, but later became intent on elevating himself to a position of power. Seemingly killed two additional times, he eventually challenged Thunder Man to a “final” battle in 1984 that concluded when he accidentally stabbed himself with his own knife and plummeted from the top of a skyscraper. His body was not recovered afterward.

The Masked Menace has not made a comeback since his most recent apparent death. If history is any indication, though, it is only a matter of time. Thunder Man remains vigilant, always prepared to meet his perpetual enemy again.
Posted by C. Elam at 8:25 PM