The City of Clocks 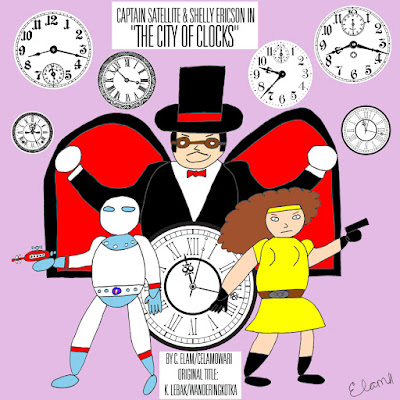 The City of Clocks

It all began one sweltering summer afternoon in Major City. Paul Mann and Shelly Ericson were enjoying a relaxing day off downtown, taking in the sights and sounds of that historic district. They came across an unfamiliar antique shop, which was puzzling since they had passed the address countless times and never noticed it. What was even stranger, the shop itself looked positively ancient.

Paul and Shelly entered the store to investigate and were greeted by an odd grandfatherly type intent on fussing over their every move. Evidently the owner, he was relentless in pushing a certain vintage clock on his customers. Though Shelly had no interest whatsoever in such a thing, she inspected the relic to humor the old man. Suddenly, a beam shot out of the timepiece's face and Shelly disappeared in a puff of smoke!

Paul Mann activated his Digital Changer just in time for Captain Satellite to be caught in the clock's beam, too. As Cap also winked away, the wizened shopkeeper cackled fiendishly. Light shifted around him and he stood revealed as none other than Hugo Beaumont!

Hugo's plan was insidiously clever. He had exiled both of his foes into that weird limbo known only as the Unknown Zone. Even worse, they had been dropped into the portion of the Zone called the City of Clocks. The City of Clocks was a region governed by innumerable floating clocks, but none of them were in sync. The time shift which occurred there as a result meant two people could be right by one another and yet forever separated by the passage of just a few minutes.

This was the dilemma of Captain Satellite and Shelly Ericson. Even though they were at times only inches apart, each was trapped in a different moment away from the other. If they couldn't work together, there was no hope for escape.

Finally, after conferring with Shelly via notes left in one time period to be discovered in another, Cap adjusted the frequency of his digital powersuit. He "phased" out of his own plane and kept turning the dial until he could find the one where Shelly was trapped. Their reunion was joyful, but there was still the small problem of being stuck in the City of Clocks and the Unknown Zone.

Hugo Beaumont had seen enough on his Trans-Dimensional Tube Set. He had not schemed so carefully to be denied by technological trickery! He arrived in the City of Clocks, Bombastic Blunderbuss in hand. Alas, his indiscriminate shooting proved to be his final undoing. He accidentally destroyed the only clock still controlling Cap and Shelly's movements, and by default, sent them tumbling back home. Hugo could easily free himself from the Unknown Zone with his Chronal Belt, but that was beside the point. He'd been outwitted again!

Back on Earth, Captain Satellite and Shelly Ericson stood in front of the spot where the antique shop had been. It was now just an abandoned building, with no evidence of Hugo Beaumont's meddling. They had only been gone a matter of hours, but it felt more like weeks after all the warping of time they had endured. They headed back to March Mansion, eager for an evening where they didn't have to worry what time it might be.