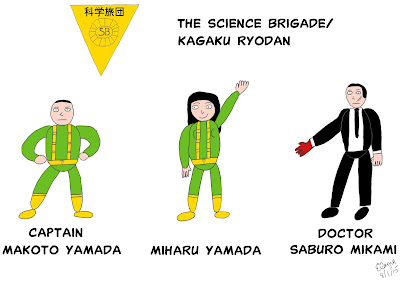 In response to the rise of the Third World division Dai San Sekai (第三世界; "Third World") in their country, the Japanese government has established the Science Brigade (科学旅団 Kagaku Ryodan) as a countermeasure. The Science Brigade is an elite task force of top-flight specialists from a wide range of fields. Their mission is to investigate and, if necessary, take decisive action in cases involving "unorthodox" incidents - especially those connected to Dai San Sekai.

Due to their shared goals of smashing Dai San Sekai, the Science Brigade often finds itself crossing paths with the superhero Red Taiyo (レッド太陽 Reddo Taiyo). They have assisted each other for the common good, but there is an understandable rivalry between the team and the hero. There are also doubts among segments of the Brigade about Red Taiyo's intentions. Obviously, the Science Brigade is unaware of Red Taiyo's true identity or his origin as the chosen champion of the mysterious Sun Men (サンメン). All they know is that it was pretty coincidental he showed up to fight Dai San Sekai just as it appeared, wasn't it?

Though the Science Brigade is a relatively new agency, it already has a large number of operatives scattered throughout Japan. As a result, not every member participates on every case. However, there is an "inner circle" which has a hand in most Brigade business. It is composed of the following members: