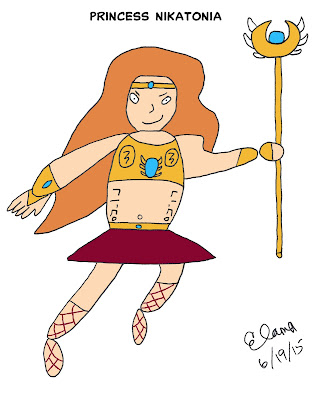 Princess Nikatonia is alien royalty from the planet Oraygion. By most accounts, she is the black sheep of the Oraygion Imperial Family and has absolutely zero chance of ascending to the throne as her world's ruler - no matter what she says to the contrary. Ambition coupled with an ingrained wanderlust conspired to send her out into the vastness of outer space.

Somehow, Princess Nikatonia's journey through the cosmos brought her to Earth. Her purpose now that she's arrived is to abduct women and return with them to her homeworld. Her reasons for this undertaking are unclear. Some have speculated it is to perform a weird ritual on them and convert them into "Miniskirt Minions" who will help overthrow Oraygion's current monarch. Whether that's the case or not, Princess Nikatonia has expressed her preference for the company of females, and considers them clearly superior to males.

Princess Nikatonia wields the Stellar Staff, a powerful weapon she uses to channel a mysterious force dubbed "Jadoo." The Stellar Staff allows her to fly through space unprotected and blast her opponents with a dynamic light ray. The princess also insists the enigmatic Jadoo is the source of her strength in battle. However, no one beyond the planet Oraygion is sure exactly what Jadoo is supposed to be.

Predictably, Princess Nikatonia's periodic forays onto Earth have brought her into conflict with Captain Satellite and Shelly Ericson. Somewhat less predictably, these battles have led her to conclude that Shelly would be an ideal subject for her objective. This has added an underlying tension to their encounters which makes Shelly profoundly uncomfortable and Nikatonia uncommonly enthusiastic.

When not chasing after Shelly and other Earth women, Princess Nikatonia navigates the universe in The Lunar Galleon, her star cruiser which looks suspiciously like a Spanish galleon. In fact, this and other similarities between Earth and Oraygion would seem to go farther than just sheer coincidence. If there is indeed an underlying connection between the two worlds, it has yet to be explored in any meaningful way.
Posted by C. Elam at 9:55 AM