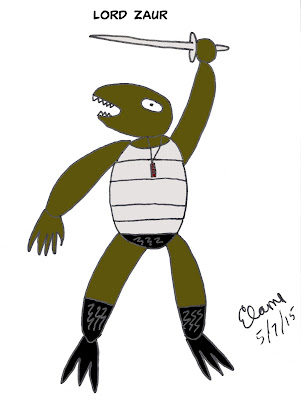 It is not commonly known that there is an eighth continent not found on any map and not accessible by normal means. This continent, referred to as Pangaea by those aware of its existence, occupies an other-dimensional plane and can only be reached by a mystic gateway in the Andes. In Pangaea, dinosaurs and other prehistoric animals roam side by side with cavemen in a wild and untamed environment. The more civilized humans native to this mysterious land refer to it as "The Hidden Empire."

Lord Zaur was King of the Zaurians, a tribe of humanoid dinosaurs dwelling in the jungles of the Hidden Empire. He first learned of our world decades ago when a group of hapless mountain climbers stumbled across the Andean gateway and became lost in the Hidden Empire. It fell to Tex Truman to find the men, and Lord Zaur did not take kindly to Truman's intrusion. He swore revenge on the intrepid cowboy for somehow pulling off a daring and ingenious rescue of the imprisoned climbers.

Soon enough, Lord Zaur discovered the gateway to enter our world. What began as a desire for vengeance soon expanded to designs for conquest as he led a cadre of trusted Zaurian warriors on a campaign against modern mankind. Tex Truman thwarted this effort in a series of showdowns which left Lord Zaur the only surviving member of the Zaurian war party. The two opponents met in a final battle in Antarctica that ended when Lord Zaur was trapped in an iceberg in its frigid waters.

Lord Zaur is still cooling his heels within his frozen tomb, but the possibility always exists he might one day escape. The magic totem the dinosaur man wears around his neck ensures he will live in suspended animation for as long as he is encased in the ice of the South Pole. Oh, and there's also the little matter that no one is quite sure exactly where Lord Zaur is in the ice floe at this late date.
Posted by C. Elam at 8:33 PM