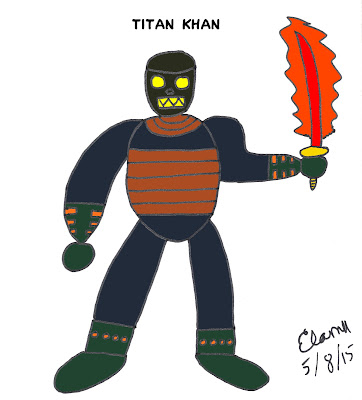 It still stands as one of the most harrowing cases in the long and illustrious careers of Tex Truman and Gabrielle "Jinx" Fitzgerald, even years later. The beginning was inauspicious enough, with C.H.I.E.F. agent Rollo Yee (余宗道 Yu Chung-tao) receiving a communiqué from his connections in China. However, the message contained an ominous warning to Tex and Jinx - Third World had taken out a contract on their lives. To prove they really meant business, the subversive organization had hired one of the most feared names in the Far East - Titan Khan.

Titan Khan (提坦可汗) had a reputation as the deadliest assassin in all of Asia. He was also a mysterious figure, wielding an unconventional Flame Sword and concealing his true identity behind a bronze mask. He had demonstrated fluency in over a dozen languages, but his “voice” in each was different and clearly mechanically-processed. Jinx would later observe he sounded like he was “badly dubbed.”

The cat-and-mouse game began almost as soon as Titan Khan arrived in Major City via Third World transport plane. He traced Tex and Jinx to The Beige Buffalo steakhouse where they were eating dinner and confronted his targets there. The chase criss-crossed town, with neither hunter nor prey getting an upper hand, until they finally arrived at Lake Grand. After a fierce showdown, Tex and Jinx emerged victorious and claimed Titan Khan's Flame Sword as a prize.

Titan Khan somehow escaped following his defeat at the hands of Tex Truman and Jinx Fitzgerald, but the failure effectively put an end to his legend. He vanished without a trace, and not even his confederates were able to track him down. His current whereabouts and activities, if he is still alive, are unknown.
Posted by C. Elam at 8:28 PM