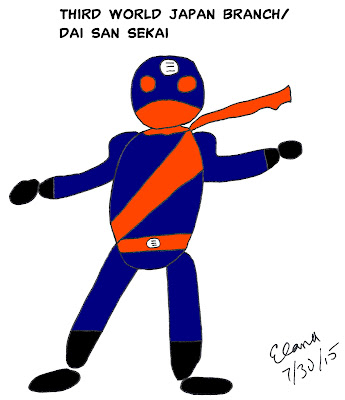 In a bid to expand their influence throughout Asia, Third World has founded a Japan Branch called Dai San Sekai (第三世界; "Third World"). Unlike other divisions of Third World, Dai San Sekai has its own distinct identity separate from the rest of the organization. Its henchmen, known as Dai Sannin (第三人; "Third Men"), wear uniforms unique in the Third World hierarchy. They are, however, just as effective as any other Third World agent.

Dai San Sekai's stock-in-trade is the creation of non-living monsters designated Sekai Kaibutsu (世界怪物; "World Monsters"). These Sekai Kaibutsu are key components of most Dai San Sekai schemes. They are churned out with such regularity that no one even bothered to pursue the Sekai Kaibutsu named the Burger-Meister (バーガーマイスター; Bāgāmaisutā) when he fled to America. Unfortunately for Dai San Sekai, no Sekai Kaibutsu would ever be mistaken for a genius.

No one is quite sure who is in charge of Dai San Sekai, even within the group itself. Ostensibly the commander is Dai San Leader (第三リーダー; Dai San Rīdā), but the catch is that no one has ever actually seen him. He communicates with his subordinates via remote voice transmission from an undisclosed location. There are rumors Dai San Sekai is controlled by extraterrestrial interests, which might explain Dai San Leader's elusiveness even among his own lackeys.

The rise of Dai San Sekai has not gone unnoticed outside of Japan. Both Captain Satellite and C.H.I.E.F. are monitoring the situation closely, but have chosen to leave the battle in the hands of homegrown heroes Red Taiyo (レッド太陽 Reddo Taiyo) and the Science Brigade (科学旅団 Kagaku Ryodan) unless their assistance is requested. Interestingly, the main office of Third World is also watching Dai San Sekai warily. There is a fear among Third World's ranks that their very independent subsidiary will break away and establish itself as a dangerous rival.
Posted by C. Elam at 7:07 PM