My World : The Azure Ant 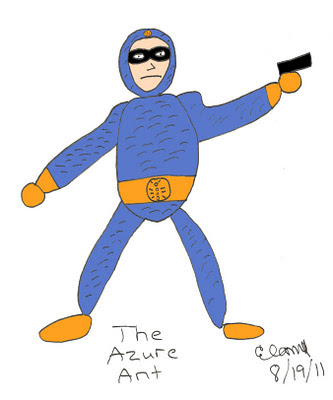 Rip Witchell is a former officer in the Major City Police Department who was busted for corruption. Ousted from the MCPD, he broke out of prison with the help of his ingenuity and connections. Witchell then disappeared into the shady world of the underground to plot his next move.

The Azure Ant is the result of Witchell’s scheming. Donning the guise of an obscure comic book hero, Witchell’s goal is nothing less than taking over organized crime in Major City. Neither the authorities nor the current gangland leaders find the Azure Ant’s plan particularly appealing.

Given the nature of his ambitions, the Azure Ant has inevitably clashed with Captain Satellite and other heroes based in Major City. Somewhat oddly, he claims that his “secret weapon” in his battles is his steadfast devotion to the soft drink Kooba Cola. He says Kooba is “invigorating, refreshing, and delicious” and “gives him the pep he needs” in taking on his foes.


Before anyone asks, "Witchell" is not a typo, but a perfectly legitimate surname. It came to me in a dream, and I was just as surprised as anyone to learn it was real. I pretty much had to use it after finding out it was.

During both 2007 and 2010, I toyed with the concept of reviving an insect-themed villain or two from my past roster of characters. Alas, nothing ever clicked to my satisfaction. Then earlier this year, I hit upon the Azure Ant name (spinning out of an older character called the Albino Ant) and my mind went into a different direction than earlier attempts.

The Blue Beetle is a comic book character with a long and torturous history, but most of it is not important for our purposes. What is important is that I am a fan of the character in all his incarnations (if not all the stories, oh no) and the original Golden Age version is in the public domain. The "Blue Beetle" name and subsequent versions of the hero are owned by DC Comics, but the first claimant to the name is free for anyone to use.

Essentially, the Azure Ant is a parody/homage to the Blue Beetle, but with a helpful name change. BB's original secret identity was policeman Dan Garret, so my villain is a corrupt former cop out to take over the underworld. And there it was - a way to make this new villain distinctive enough to have a reason for existing.

...Oh, the Kooba Cola thing? Kooba Cola was a soft drink marketed by Victor Fox in the pages of his comics (including Blue Beetle) and the BB radio show. Though promo materials exist, there is a question as to whether it was actually produced. I had already integrated Kooba Cola into the Owariverse in a story that has not yet been released, so I liked pairing the Azure Ant with it. There was also some inspiration found from Captain Beefheart's apparent addiction to Pepsi.

(And no, that color scheme isn't strictly speaking "azure" in hex code. I went with something that mirrored the Blue Beetle and just regarded the word as a synonym for "blue" in this instance.)
Posted by C. Elam at 12:29 AM