I recently did a small favor for Kabuki Katze, and in return, she created an ACEO for me. Rather than electing to have another card done of one of my personal characters, I instead asked for The Penguin!!! 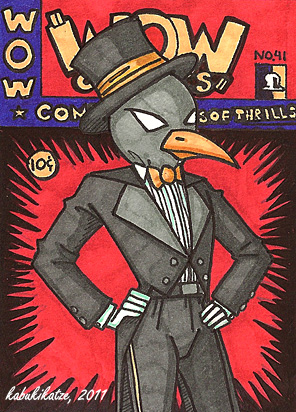 No, not that guy.

This Penguin is a 1940s Canadian superhero. He toplined Wow Comics for Bell Features and was created by Adrian Dingle. His alter ego may (or may not!) be Bruce Baron, but he definitely is a champion of justice dressed like a penguin.

Well obviously, the Canadian Penguin is such a daft idea that I have to love him. I had been keeping him in my backpocket as a possible commission subject should the time ever be right. I judged the time to be right, and unleashed Kabu on the guy.

I didn't request a tiny comic book cover, but am positively delighted by it. She did an amazing job re-creating the look of those Canadian "whites" with only a few images. And hey, she gave the Penguin a top hat! In an oversight I can scarcely believe myself, it does not appear he wore one in the old comics. Clearly, this needed to be remedied.

The Penguin is a character I have always found awesome, and now I have a version of him to treasure for myself. Tell Kabuki yourself how cool she is!
Posted by C. Elam at 12:46 AM