I have commissioned Kabuki Katze to do many art pieces based on my characters. Among the most popular with the public at large is a series I dubbed "Altered Egos." The gist of Altered Egos is to depict the civilian guise of one of my characters, with the background being their super identity.

Here's a handy checklist of the pictures in the Altered Egos series so far:

One thing I sort of glossed over in introducing this series was its origins. You see, this particular layout did not come to me out of a void. In fact, it was inspired by some earlier pieces Kabuki had done for me in 2008-2009.

To backtrack, the two pictures seen below of Reiko Hayasaka (Blue Swallow) and Etsuko Oishi (White Swan) of Return of Jetman fame were done as giftart. Other than choosing the characters and the premise, I didn't really plan these out. The wallpaper formatting with the headshot serving as background did, however, plant the seeds in my mind for what became Altered Egos.

For the record, this is not how Reiko and Etsuko are usually costumed. I asked Kabuki to create sexy lingerie-style outfits for them based on their standard uniforms. This was an outgrowth of a picture of Kei Mizuno (Green Wyvern) that had been done a couple of months earlier by Sara. And so, the process continues. Every project feeds into another one, whether we know it or not.

Anyway, without further ado, here's Reiko Hayasaka in "Sing, Bluebird" and Etsuko Oishi in "Swan Song! They are the beginnings of Altered Egos! Don't forget to click them for full-size! 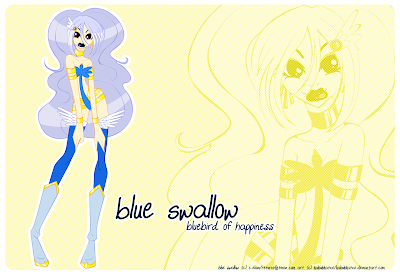 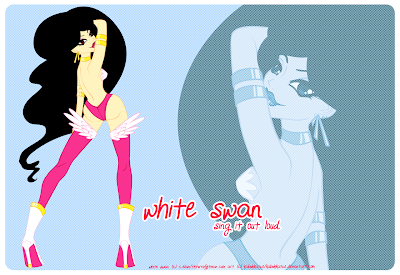