You can consider this a sidenote to the "History of Captain Satellite" series. Our subject today is Urban Nightmare. While there seems to be precious little art of the Nightmare prior to 2007, I do still possess his very first appearance. 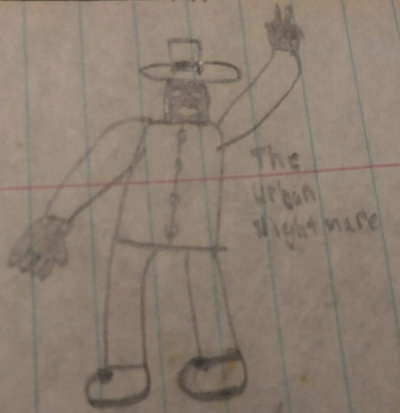 The truly remarkable thing about this artifact is that I can put a date on it. You see, the full sheet of paper also includes a reference to the Steve Winwood song "Freedom Overspill" which was receiving radio airplay at the time. Since "Freedom Overspill" was released as a single in 1986, that surely places the Urban Nightmare's creation during that year, too.
Posted by C. Elam at 11:26 AM

Email ThisBlogThis!Share to TwitterShare to FacebookShare to Pinterest
Labels: behind the scenes, my art