I became a regular on the internet in February 2001, but this meant very little to Captain Satellite. I was busy with other things for those first few years, like Return of Jetman. The only true glimmer of activity with Cap was my use of his name as an alter ego for Livejournal. My LJ carried the title "Captain Satellite's Fun Fun Central" for most of its existence. At least I stopped signing the entries "Cap" after awhile...

The decision to have Captain Satellite proper make his public debut was not as momentous as it might seem like it should have been. I signed up for a DeviantArt account in 2004, but had no intention of posting art there. I changed my mind when some graphics I had posted were deleted. Rather than slinking off and forgetting about the whole thing, I chose instead to use my artwork as a form of trolling. I'm still posting it almost 15 years later, so my reasoning has evolved over time. But I suppose I'm getting ahead of myself.

My very first submission to DA under this new philosophy was an image of Captain Satellite on November 19, 2004. A smaller version of it was turned into an icon, and it served as my DA avatar until sometime in 2014. It is singularly unmemorable. 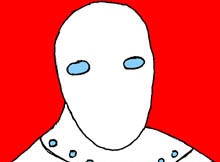 If you're at all familiar with my art, you're probably thinking, "That doesn't look like one of yours." Well, yes and no. I did draw it, but it's not done in my style. It's a swipe of a Gil Kane Spider-Man from What If? #24 (December 1980). I did a lot of blatant and obvious swipes from 2004-2007 because I was treating my art as kind of a joke and also because I still had very little confidence in my own ability.

My change of direction on DeviantArt did not immediately lead to a renaissance for Captain Satellite. My gallery was mostly random odds and ends. However, Cap did play a role in two key pieces from those early years of my posting art online. 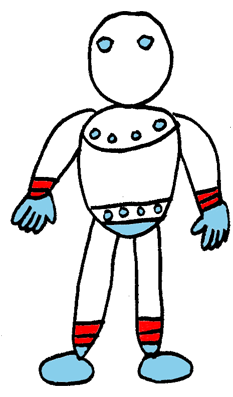 This guy is from April 2005, and he was part of a larger DA ID image (the rest of which isn't relevant for our purposes). This was the first time I'd really sat down and tried to capture the definitive Captain Satellite design - though it has changed since this one. This was done in my natural style, and I remember it took entirely too many tries to get something I liked. This didn't bode well for a lot of Cap content in the future.

(Click to read full-sized version)
This August 2005 sample is probably shocking to anyone coming in late. Yes, I drew an actual COMIC STRIP starring Captain Satellite! It was always intended to be a one-shot and it was meant to be satirical. Trouble is, I don't remember exactly what I was satirizing anymore! Oh well. Guy in the Yellow Suit is probably not going to be making a comeback in the Owariverse, but this is the closest I had ever come to doing something "real" with Cap. Too bad I made a coloring flub.

Captain Satellite was probably fated to an eternity of sporadic appearances like these if it hadn't been for real life rearing its head. We had a fire at my home in January 2007, and I found myself sleeping on a couch at my sister's place for a month or so while we tried to get things cleaned up and back in order. When I finally got back to what I have whimsically dubbed "OWARI HQ," I began thinking about my old personal art which had almost gone up in flames and was slowly crumbling away. I decided to scan a number of pieces which were important to me, and you have seen a couple of examples of these in Part 1 of this series. I uploaded examples of my vintage art to my DA account, and it was a hit.

It was a real revelation for me when people were reacting favorably to things I had drawn in elementary school. This wasn't ironic laughter (though we had plenty of laughs too), but genuine enjoyment. I was so inspired by this unexpected level of interest that I began tinkering with new art of some of my old characters.

During this time, one of my biggest supporters on DA was a user who had the screen name "Sarapuu." So when Sarapuu had some personal stuff bring her down, I wanted to cheer her up. But how? 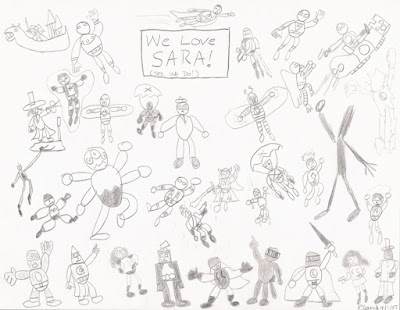 Click to see EVERYBODY!
No, your eyes do not deceive you. There are THIRTY-FOUR characters in that picture! I drew it in pencil because I'm not completely mad, but this was all done in one sitting on April 1, 2007. Appropriate, no? It was posted on April 2, 2007, and reportedly had the desired effect of cheering up Sarapuu.

What's most interesting about this piece today is my decision to include Captain Satellite and several related characters. They hadn't been part of my previous "revival" pictures of older heroes and villains, but it felt wrong to omit them from the festivities. So Cap, Shelly Ericson, Urban Nightmare, Third World, Hugo Beaumont, and Blue Behemoth all appeared for the first time in quite awhile (years in most cases). Even more historically, this picture marks the VERY FIRST TIME I had ever drawn the characters Firegirl, Drone Man, Ultimate American, and Thunder Man. It's also the first time I had included Elektroid and Enemy Alien with the Cap crew (I would soon induct them into that canon), and the first time Amazing Girl and Muscle Woman were depicted alongside those characters, too (they eventually found themselves part of the Owariverse by popular demand!). So, a lot of Owariverse firsts are on display!

I had no way of knowing it at the time, but this gift art for a friend was the seed which would eventually sprout into the Owariverse. Unfortunately, that growth is a pretty messy thing to track, full of stops and starts and ideas both good and bad. In a way, it's almost like genuine comic book continuity.