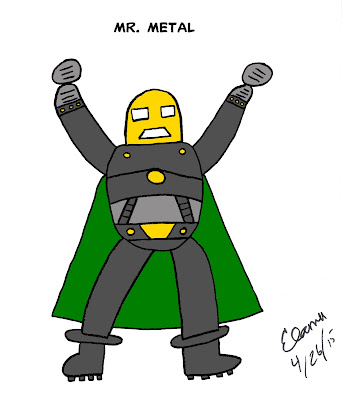 It's a story we've all heard countless times. Two business rivals compete in the same arena. One of them is far more successful in his endeavors. The other lags behind and declares bankruptcy. Usually, the results aren't worth discussing. The case of Paul Mann and Louis Schmidt is the exception.

Louis Schmidt losing out to Paul Mann had nothing to do with a lack of skill on Schmidt's part. It also wasn't due to any unethical behavior on Mann's behalf, but Schmidt saw it differently. He felt Mann's gains had to be because he was cheating. To Schmidt, there could be no other explanation. He was clearly superior to Paul Mann in every way - at least in his own mind.

Especially galling to Louis Schmidt was Paul Mann's career as Captain Satellite. Schmidt complained loudly and often that reporting the Captain's exploits constituted free advertising for Paul Mann's business interests. He demanded equal time, but was rebuffed at every turn. This did not sit well with him.

Bankruptcy for his company Schmidt Industries was the last straw for Louis Schmidt, and the end of anything passing as reasonable behavior. Whether he snapped completely or just was consumed with a lust for revenge is academic. Schmidt used his failed company's resources to create the armor that would make him into a super villain. Now known as Mr. Metal, he swore he would destroy Paul Mann just the way he believed Paul Mann had destroyed him.

Mr. Metal's armor is kitbashed from bits and pieces Schmidt had lying around his factory. It is comprised of a remarkably resilient alloy that can withstand considerable punishment. The gauntlets are armed with powerful industrial-strength lasers. For transport, the boots are equipped with propulsive air jets that enable the wearer to fly.

Mr. Metal has never quite achieved his stated goal of destroying Captain Satellite, but he has continued his vendetta unabated. He has been known to form a team-up of convenience from time to time with fellow felon and former cellmate Disco Ball. Neither is very happy with that arrangement, for differing reasons.
Posted by C. Elam at 12:26 PM