As I mentioned during the on-going "History of Captain Satellite" series, tracing the evolution of my characters is not exactly a nice and neat straight line. Tonight, we're going to look at an almost-forgotten interlude in the development of Shelly Ericson. It didn't really have any impact on her character, but it demonstrates how long I had entertained certain ideas about her.

In 2001, I downloaded the "classic version" of Hero Machine. I played around with it for awhile and then lost interest. However, I never deleted it, and it was still sitting on a CD-R when I began to transfer all my old files to flash drive in late 2012/early 2013. Hiding within my Hero Machine folder was a sub-folder labeled "Characters" and among the files were a couple of early prototypes of Shelly Ericson!

(What of Captain Satellite? Good question. There was nothing for him in the sub-folder. I guess Hero Machine was deemed inadequate in visualizing Cap!)

I recreated the Shelly prototypes and then took screenshots of them so I could share them with the world. I'm compelled to mention that there were three, but Number Three looks to be the exact same Shelly as Number One so it has been omitted. What's truly amazing about these is that by August 28-29, 2001 (when these were originally done), I already had a clear concept of who I wanted Shelly to be and how I wanted her to look. It just took a few years and some helpful pointers from a couple of friends to get MY version of Shelly Ericson out in the world. 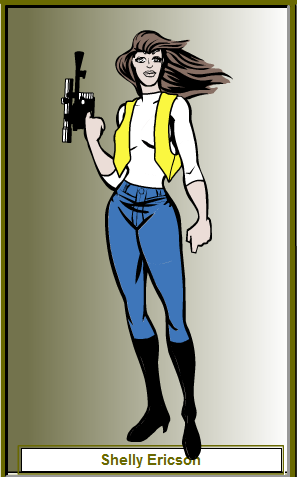 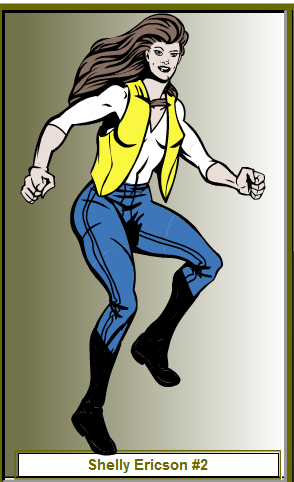 Email ThisBlogThis!Share to TwitterShare to FacebookShare to Pinterest
Labels: behind the scenes, gimmicks