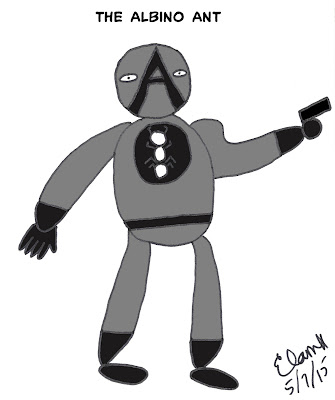 Rip Witchell is a former officer for the Major City Police Department who was busted for corruption. Ousted from the MCPD and incarcerated for his crimes, he broke out of Phipps Prison through his ingenuity and connections. Witchell then disappeared into the shadows of the underworld to plot his next move.

The Albino Ant is the result of Rip Witchell’s scheming. Donning the guise of a super villain, Witchell has set for himself the goal of nothing less than taking control of organized crime in Major City. Neither the authorities nor the current top gangland bosses find the Albino Ant’s plan particularly appealing.

Given the nature of his ambitions, the Albino Ant has clashed with both law enforcement and rival gangsters. Though the crooks are more ruthless in their desire to maintain a grip on the town's rackets, they have met with repeated failures in trying to rub him out. The cops have been more successful in breaking up the activities of the Albino Ant's syndicate, such as the gang's attmpted extortion of protection money from every location of Heller's Department Store in the city. However, the police can only do so much if they are unable to catch the top dog.

The Albino Ant has so far wisely avoided confrontation with Captain Satellite, Urban Nightmare, or any of the other heroes of Major City. It seems inevitable he will have to deal with them sooner or later to realize his ultimate objective. It may turn out to be "sooner" given the Albino Ant's recent threats to topple the Kooba Corporation, manufacturer of Kooba Cola and other popular soft drinks. The reason for his vendetta against Kooba is unknown, though there is conjecture it stems from shady dealings with Kooba president Vittorio Wolfe during his time on the police force.
Posted by C. Elam at 7:57 PM