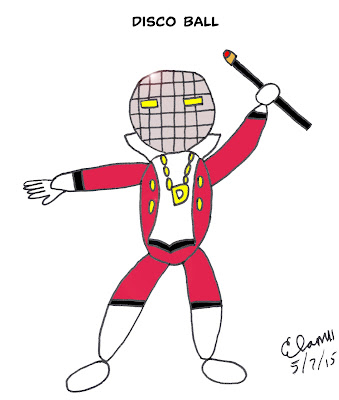 Disco never died! That's the premise of Disco Ball, the super villain who supplies his own theme song. Not-so-secretly Vance McGuire (one-time producer/engineer for popular soul music acts like the Ratios and Billy Popcorn on Major City's Gold Bar Records label), Disco Ball is on a crusade to discover the evil possibilities of disco. Which are legion, as you might imagine.

Utilizing weapons powered by his Discotech System, Disco Ball has racked up some impressive criminal credentials. He first made headlines with his takeover of Major City's famous dance club Studio 69, declaring that he would turn it into “Studio 86” if he wasn't paid off extravagantly. He has also threatened to convert legendary disc jockey Curt Koorey into sound waves (Disco Ball holds a grudge because Koorey refused to play his personal compositions on the radio) and brainwashed iconic rock singer Flint Nickell into performing disco tunes on live television (with sinister subliminal messages added for the hapless viewing audience). Though often ingenious, his schemes have been repeatedly foiled by Captain Satellite and Shelly Ericson.

Disco Ball has soldiered on in spite of his setbacks. He usually works solo, but has occasionally teamed with Mr. Metal after the two met while sharing a jail cell at Phipps Prison. This pairing of opposites has proven to be...combustible at best. Disco Ball prefers to employ henchmen he insists on calling the Boogie Knights if he needs added muscle on a job. These henchmen are why he carries a swagger stick. And yes, it's a “swagger stick.” Not a pimp cane.
Posted by C. Elam at 12:15 PM