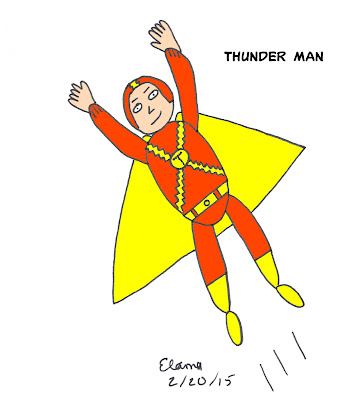 “HE'S THUNDERRIFIC!” the newspaper headlines proclaimed in 1939. That was when archaeologist Ray Bancroft announced he had discovered a survivor of the lost continent of Atlantis in a tomb nestled in ruins that had recently surfaced from the ocean floor. This survivor was Thunder Man, a super-powered champion who had been unable to prevent the Atlantean disaster. Seeking to atone for this failure, Thunder Man pledged to protect modern mankind as he had his ancient homeland. Thunder Man's amazing deeds would go on to become the stuff of legends.

At least, that's how it went somewhere else.

Thunder Man is the greatest hero of a Parallel Earth, different from the Earth Captain Satellite calls home. He uses his powers of super strength, invulnerability, flight, swiftness, and heightened senses to fulfill his vow to protect the world of today. He is also apparently immortal, as he has not aged noticeably in the decades since his awakening. Because of this, Thunder Man does not maintain an alter ego, but lives on an artificial island named Magnifica located off the east coast of the United States.

Thunder Man repaid Captain Satellite months later when he used his Volt Vimana craft to rescue Cap after he had been stranded in the Unknown Zone. Since that day, the two heroes have become true cross-dimensional allies. Captain Satellite is fascinated by Thunder Man's lengthy and storied career, and occasionally looks to the veteran hero for advice via a special channel on his Multi-Viewer.
Posted by C. Elam at 7:37 PM