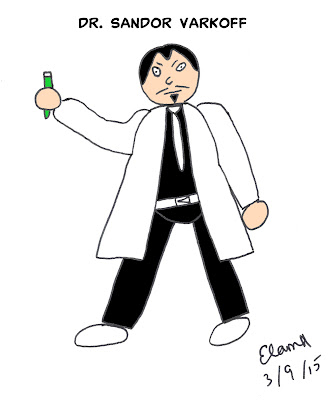 Mad science is still not a recognized discipline, but if it ever is, Dr. Sandor Varkoff would be an excellent candidate for accreditation in the field. Varkoff has a vast body of knowledge in a wide range of specialties, and is unquestionably a genius. Unfortunately, this brilliant man is also extremely twisted, and has a penchant for hatching plans that can only be called “crackpot.”

Dr. Varkoff's career path as a mad scientist has led him to butt heads with Captain Satellite and Shelly Ericson on several occasions. He has never been particularly successful in any of these clashes, but he's persistent. You have probably heard the popular wisdom on doing the same thing over and over and expecting different results.

Mad science doesn't pay the bills (yet), so Sandor Varkoff frequently sells his services to other criminals when he's not pursuing schemes of his own. Third World is a repeat customer, but he will design and build any gadget for any crook with the money. There have been a few who have welshed on deals, but most understand the folly of ripping off someone capable of pulling out a death ray at a moment's notice.

Dr. Sandor Varkoff's chief claim to fame is being the creator of Elektroid, the robot which rebelled against him and later joined the heroes of the Invincible Alliance. Varkoff was also responsible for unleashing the size-changing gorilla Gargantua Maximus on an unsuspecting world before losing control of the beast. Notice a pattern here?
Posted by C. Elam at 6:49 PM