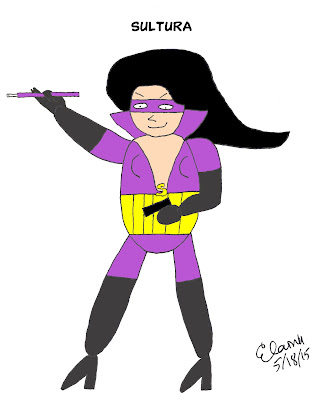 She's bad. She's ambiguously European. She's famous for being infamous. She's Sultura, and she's a constant thorn in the side of those who fight for justice.

Sultura is a safecracker, burglar, smuggler, counterfeiter - the list is seemingly endless. The most consistent trait in her career is her vanity. Her motto “I make being bad look damn good!” is not just a catchphrase, but her goal in life. Most people would not go so far as to print up fake money with their own picture on it, but most people aren't Sultura. She may end up redefining narcissism, if anyone ever discovers what the limit of hers actually is.

As you might expect, Sultura's ego tempted her into seeking conflict with Captain Satellite. After all, what could be more high profile than being chased by a superhero? Her first crime aimed specifically at grabbing Cap's attention was targeting Major City's famous Kurtzberg Museum of Art. Other memorable stunts include her attempt to kidnap obnoxious playboy Dick Major right out from under Cap's nose and breaking into the hero's own March Mansion just to take a bubble bath.

Sultura has particularly earned the wrath of Shelly Ericson for taunting her as Captain Satellite's “concubine” during one especially brazen heist. Shelly has promised that there will be payback each and every time she gets her hands on the femme fatale. And Shelly isn't the sort to make such a promise and not fulfill it.
Posted by C. Elam at 8:00 PM