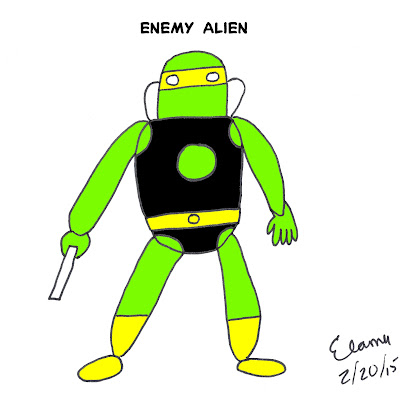 In the months following Captain Satellite's debut, Major City was abuzz with sightings of an unidentified flying object. Some witnesses even reported spying an extraterrestrial wearing a spacesuit and rocket pack in Kisch Forest outside of the city. Sensational and paranoid news accounts of this flap labeled the alleged visitor "Enemy Alien," and the name stuck.

In truth, Enemy Alien was Raeyear, an explorer from the planet Muranos sent to learn about Captain Satellite. Armed only with a single laser gun for self-defense, Raeyear's mission was to find out whether this "Captain Satellite" was peaceful or not. If deemed friendly, Raeyear was to offer Cap a mutual aid pact in the event of a hostile invasion of Earth. Unfortunately, "Bulldog" Buddy Rockwell and his gang crossed paths with the alien astronaut first. They extorted him into working for them by threatening to blow up his starship with crates of explosives looted from a local ammo dump.

Therefore, Captain Satellite and Enemy Alien first encountered one another as opponents rather than allies. This deplorable situation was quickly resolved, and the gangsters were collared in the resulting fracas without Enemy Alien's ship being blown to smithereens. Misunderstandings were explained, friendships were made, and Enemy Alien departed Earth with the pledge that the resources of Muranos were available to Captain Satellite should he ever need them.

Years later, Enemy Alien seemingly resurfaced to steal rare gems from Cathcart Jewelers in Major City. The Invincible Alliance investigated the case, and were skeptical of Captain Satellite's contention that his old friend was innocent. Even contacting Raeyear via the Multi-Viewer did little to quell their doubts. When Enemy Alien was finally captured, he stood revealed as..."Bulldog" Buddy Rockwell in a facsimile of the spacesuit that he'd contracted Dr. Sandor Varkoff to create (and then swiped without payment).

Buddy Rockwell is once again incarcerated for his various and sundry crimes. The Enemy Alien replica spacesuit is currently in storage at a secret C.H.I.E.F. facility. It seems unlikely at this point that Rockwell or anyone else will wear it as a spurious Enemy Alien in the future, but anything is possible.
Posted by C. Elam at 7:09 PM